North Korea joins hypersonic arms race as US, China & Russia battle for 21,000mph nukes that can hit anywhere in MINUTES

NORTH Korea has become the latest country to add terrifying hypersonic missiles to its arsenal, joining the China, Russia and the US.

All are now in an arms race to build the nuke capable weapons, with Russia boasting it has one that can fly at nearly 21,000mph and can hit anywhere in “minutes”. 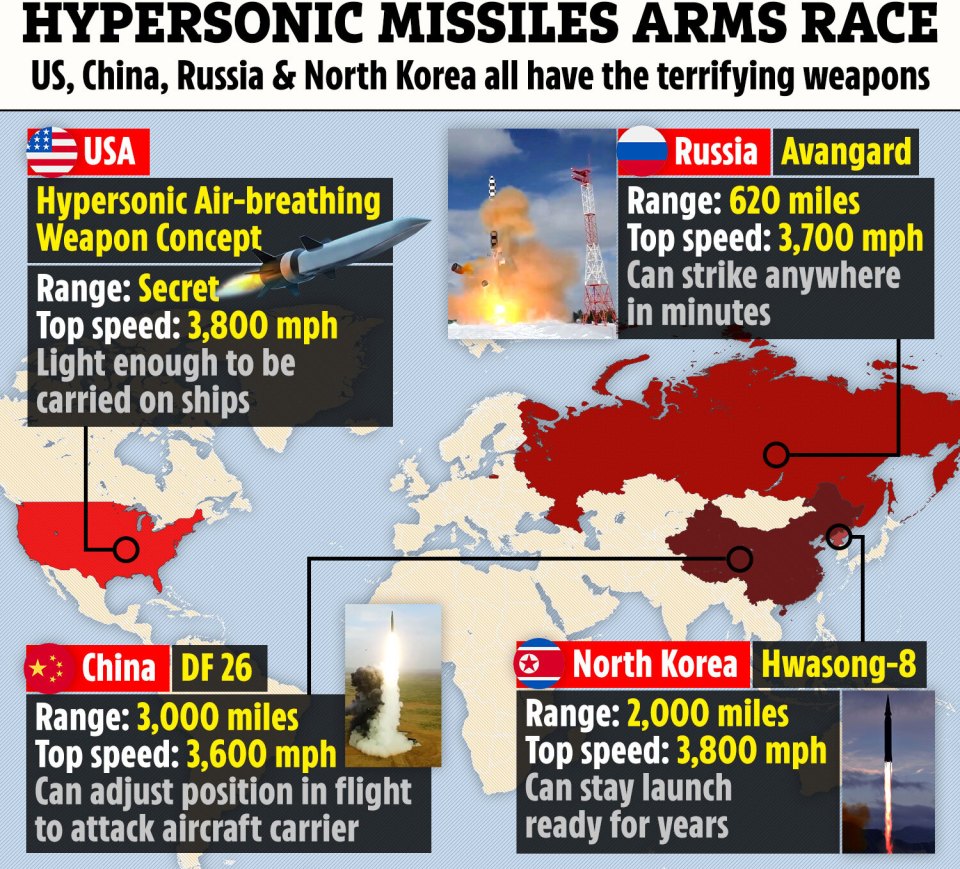 Hypersonic missiles are a game changer because unlike ballistic missiles while fly into outer space before returning on steep trajectories, they zoom in on towards targets at lower altitudes.

This combined with typical speeds of five times the speed of sound – or around 4000mph – makes them extremely hard to shoot down and a potent weapon more countries want to get their hands on.

China – followed closely by Russia – are regarded as having the most potent hypersonic missile arsenals pouring billions into them but others are catching up.

Announcing that it had joined the hypersonic club, Kim Jong-un’s regime said that it had launched a missile named the Hwasong-8.


Katie Price charged with driving while disqualified after she rolled BMW


SNOW hits some areas of Scotland as temperatures plummet across country

It comes after, North Korea stoked World War Three fears after after launching two ballistic missiles just two days after it claimed it was testing new weapons on Wednesday.

The test means North Korea is entering an accelerating race to deploy the weapon now involving the United States, Russia and China.

The firing of its missiles comes just a day after it was announced US tested its own hypersonic weapon after stepping up development in the wake of Chinese and Russian advances.

Unlike the public shows made by its rivals, the US has shrouded the test in secrecy with details like its range kept under wraps.

“Investments in hypersonic strike have begun to pay dividends, answering the progress already made by the likes of Russia and China,” said Tom Karako, an analyst at the Center for Strategic and International Studies.

A key part of the hypersonic missile concept is the glide vehicle, which is carried to around 30 miles above the earth by a rocket but then become detached.

The glide vehicle then hurtles to earth using gravity.

Earlier this year, the Russian military announced it had tested a hypersonic missile it claimed was capable of evading all Western defences.

The deadly Zircon was unleashed at a speed of Mach 7 at a land target from the frigate Admiral Gorshkov in the White Sea off the northwest coast of Russia.

The Zircon has been identified by Moscow’s state-controlled TV as Putin’s weapon of choice to wipe out coastal American cities in the event of a nuclear conflict.

The Kremlin also has in its armoury the 21,000 mph Avangard hypersonic glide vehicle, which it reportedly brought into service in 2019.

The weapon is place on top of an intercontinental ballistic missile of the kind that could wipe out human life on earth in minutes.

China alone has ploughed an extra £151 billion into military spending this year – a modest 6.8 per cent increase – as it seeks to extend its claim over territory in the South China Sea.

Its spending spree comes amid fears of an arms race among Asian powers as the world heads towards a new Cold War.

Among its hypersonic missiles is the DF-26, which state media boasted can reach a top speed of 18 times faster than the speed of sound.

It is capable of travelling far enough to blitz the US territory of Guam in the Pacific Ocean.

The missile can carry conventional or nuclear warheads, and one variant is said to be able to take out carrier groups in the open ocean.

The missile, which has a range of 2,000 miles and can travel at six times the speed of sound, is designed to create a chemical explosion over a city and cripple it within seconds.

The US has also tested its own missile[/caption]

TORY leadership favourite Liz Truss tonight claimed she would stop SNP ministers from “focusing on constitutional division” instead of...

Scots girl, 12, battered 17-year-old & locked her in room before victim fell from window

A GIRL of 12 battered a 17-year-old and locked her in a bedroom before the victim fell from a...