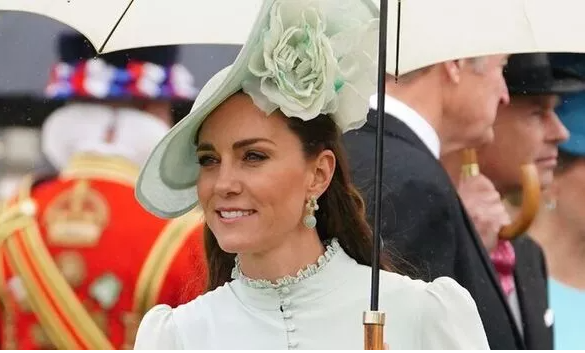 At the Buckingham Palace Garden Party on Wednesday, Kate Middleton appeared to pay tribute to Prince Harry and Meghan Markle’s 2018 royal wedding, just days before the Sussexes return to the UK for the Queen’s Jubilee.

According to Express UK, Kate wore a mint green Philip Treacy fascinator with a floral applique to Wednesday’s party as a subtle nod to the Sussex wedding.

YOU MAY ALSO LIKE: Prince Harry ‘Cannot Be Excused’ As Thomas Markle Suffers Stroke

Except for the colour, Kate’s choice of accessory was nearly identical to the one she wore at Harry and Meghan’s wedding at Windsor Castle; she previously wore a white and cream fascinator.

Kate, ever the stylish fashionista, chose a pale green gown to complement her mint-green fascinator; she previously wore the same gown to the 50th anniversary of Prince Charles’ investiture in 2019.

YOU MAY ALSO LIKE: Kim Kardashian Apologises To Her Family For How Kanye West Treated Them ‘For Years’

Prince William accompanied his stylish wife to the year’s final garden party; the annual garden parties are hosted by the Queen, but the monarch’s health prevented her from hosting this year.

“Boris Johnson Did Nothing Wrong By Missing Heatwave Cobra And Having Chequers Party”: Minister

A minister has insisted that Boris Johnson did nothing wrong by avoiding an emergency Cobra meeting on the heatwave and...

Rishi Sunak came under pressure on Thursday to quickly assist cash-strapped families, as a poll showed Labour stretching its...