Draupadi Murmu, the country’s first tribal woman, was sworn in as the 15th President

New Delhi: Draupadi Murmu took oath as the 15th President of the country. She is the first tribal woman President of the country. Chief Justice of India N.V. Ramana made him swear. Murmoo is from Odisha. He has also served as the Governor of Jharkhand earlier. Draupadi Murmu is the country’s second woman president, the first tribal woman to hold the highest constitutional office and the first president born in independent India. Apart from this, he is the youngest ever President. His age is now 64 years. After taking the oath, he also addressed.

Draupadi Murmu addressed after taking the oath and said that Johar…Greetings…I humbly greet all the countrymen from this holy Parliament, symbol of the hopes and aspirations and rights of all the citizens of India. Your intimacy, trust and your support will be my greatest strength for me to undertake this new responsibility. I thank all the MPs and all the Assembly members for electing me to the highest constitutional post of India. Your vote is an expression of the faith of millions of citizens of the country. The country has chosen me as the President at an important time when we are celebrating the nectar festival of our freedom. After a few days, the country will complete 75 years of its independence. 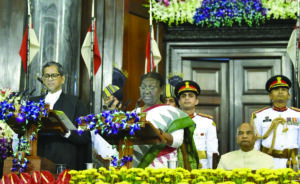 President Draupadi Murmu said that I started my life journey from a small tribal village in Odisha. In the background I come from, getting primary education was also a dream come true for me. But despite many hardships, my determination remained firm and I became the first girl in my village to go to college. It is the strength of our democracy that a daughter born in a poor family can rise to the highest constitutional post of India.

Draupadi Murmu said that I am the first President of the country who was born in independent India. We also have to step up our efforts to meet the expectations of our freedom fighters along with the citizens of independent India.

We will give 3 thousand per month to the unemployed until they get a job: Kejriwal

Journalist Bhaven Kachchi. ‘Nachiketa Award’ was given by Morari Bapu

Rajkot: Bapu even completed the story from Tripura and was directly present on this occasion. However, he looked very...

Savarkundla: Comedian, writer and noble social worker Dr. Jagdish Trivedi is currently on a three-month cultural tour of the...