Shri Salasar Balaji Temple is located in the Churu district of Rajasthan, India. It’s like a festival to the devotees during Chaitra (March-April) and Ashwin (September-October). Nitin Pujari is serving Balaji with utter dedication. He is the son of Mitthoo Ji Pujari, descendents of Kaniram Ji. Through his motivational speeches and commendable work towards serving the temple, Nitin Pujari has paved his path into the hearts of devotees. He is a well-reputed figure of Salasar. He has also been honoured in the Parliament of India with a shawl and a stone. He narrated the story of how the temple was established and what is the story behind this. 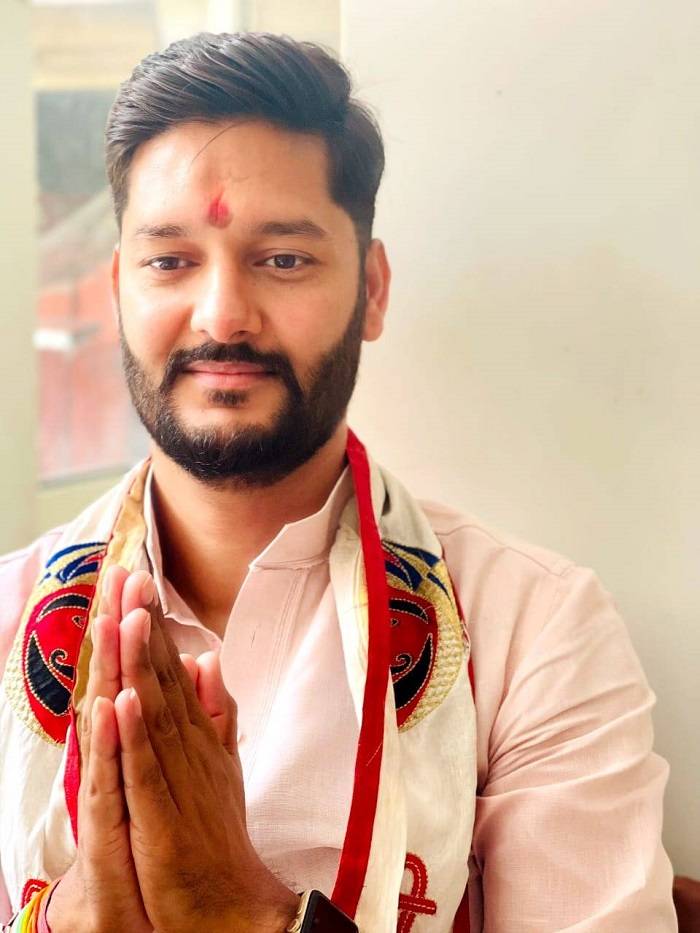 A long time ago, Pandit Sukhram used to live in Salasar, along with his wife Kaanhibai. They were soon blessed with a baby boy. They named him Shri Udayram. When Udayram turned 5 years old, Pandit Sukhram passed away. Kaanhibai was all alone with a child to take care of. She decided to move to her parents’ place in Rulyani Village. It was for the better upbringing of Udayram. She returned back to Salasar, after a long period of time. Her father Pandit Lacchi Ram was worried for her. So he asked his youngest son to go with her. Pandit Mohan Das accompanied his sister to Salasar. He was a devotee of Lord Hanuman. He wanted to dedicate his life to his feets and adopt a life of celibacy.

Then something happened one day. Uday Ram and Mohan Das were plowing the farm, one day. Mohan Das couldn’t have a firm grip on the axe and it kept falling off his hands. He told Uday Ram about this. Mohan Das had a notion that it’s the spiritual power of Lord Hanuman. Udayram told this to Kaanhibai. She got really worried about his brother. She didn’t want him to go completely insane and be a saint. Kaanhibai decided to find someone for Mohandas to marry. In the village, there’s a Nai which sends off the Shagun. Kaanhibai sent Shagun to the girl’s house. Mohan Das predicted that the bride would die and it happened exactly the way he predicted. Therefore everyone started seeing him as the fortuneteller.

He broke all ties from the world and devoted his time to Tapasya (meditation). He used to disappear into the forest and be alone. Mohan Das meditated and meditated even more. He only had one aim, it was to be with his guru, Lord Hanuman.

One day, he was having a meal with his sister. One pauper knocked at the door. He shouted ‘Alakh’! Kaanhibai went out to give food but there was no one. She searched for him but he vanished. Mohan Das got a strong feeling that it was his Lord, his Hanuman. After exactly 2 months, that same voice was heard again. Kaanhibai recognised it. She told Mohan Das about it. He ran outside and saw that there’s this man in the attire of a bhikshuk(beggar). His face was glorious, had a moustache and a stick in his hand. After the darshan, Mohan Das started running after him. Hanumanji asked him what he wished for. MohanDas understood that it was a test. He fell on his feet and held them. He said that he was happy and didn’t wish for anything. He just wanted him to come to his home. Hanumanji was pleased to accept the request. He ate the food Mohan Das served. Hanumanji then rested on an untouched cot. After that, he disappeared.

This gave the faith of Mohan Das a boon and he completely devoted his life to Lord Hanuman. He begged Hanumanji for daily Darshan and he accepted. Hanumanji came repeatedly for his bhakt (devotees). MohanDas wanted Hanumanji to never go. He couldn’t spend a moment without his Lord. Hanumanji could never refuse his beloved bhakt. He gave him a promise/boon that he will stay with him in Salasar in the form of an idol of Salasar Balaji. Mohandas kept meditating and worshipping his lord. He waited desperately for the day when his Lord will be with him forever.

Then, One fine day, a thakur of Asota came for the darshan of Mohan Das ji. He asked for his seva, and what he could do for him. Mohan Das ji asked for a good idol maker. He told him that he wants a good Idol of Hanumanji. The thakur was happy and was ready to fulfill the requirement. He went back to his village. Then one day, in Asota, a villager’s plow got stuck while farming. He started digging on the place. He found a spectacular idol of Hanumanji. He cleaned it with his wife and told Thakur about this. He was thrilled with the news. That night, Hanumanji appeared in his dream and said that this idol is for Mohandas. Next day, the Thakur, along with some villagers, took off to Salasar. With all the ceremonies and bhajan keertan, the idol was established. The day it was established was in Samvat 1811. That was the reason that in Samvat 1815, the construction of the temple was finished. The idol was decorated in the exact way Hanuman Ji appeared in front of Mohan Das for the first time.

Mohan Das gave all the education to UdayRam and also the responsibility of the Mandir and idol. In Samvat 1811, they lit up the amar jyot, which is exactly the way till date. It is running constantly.

Today, Nitin Pujari is doing a great job in motivating the devotees. He is restoring their faith in the Lord during this prevailing pandemic. Whether it’s live darshan, or Gau Mata ki seva, Nitin Pujari never fails to inspire.